China: The Liberalization of the Reminbi, and Investing in High Risk Offshore Sectors

The Chinese government has historically adopted currency controls over the outflow of the Reminbi (“RMB”), particularly in relation to implementation measures for cross-border M&A capital flows. Such policies are principally designed to stabilize the RMB in the international currency markets and maintain the balance of China’s capital accounts.

Over the past few years, such policies have inherently been relaxed due to the liberalization of the RMB and the inclusion of the RMB in the basket of currencies which make up the IMF’s Special Drawing Right (“SDR”). Ultimately, such developments are expected to contribute to the goal of achieving global reserve currency status vis-a-vis the RMB.

Whilst the liberalization of the RMB is a long term objective, short to medium term volatility in the global currency markets has placed the RMB under pressure and has resulted in a sharp depreciation versus other major global currencies. The continued interest from Chinese corporates to acquire overseas assets has further exacerbated a weakening RMB given the need for RMB capital outflows to finance such transactions. As such, the Chinese government have recently introduced a number of new measures designed to curb the level of capital outflows, including:

The new policies are, in part, designed to prevent malicious capital transactions (i.e. moving RMB offshore to protect from further currency devaluation) and to curb the outflow transactions under certain risky areas. Specifically, the administrative authorities have tightened the supervision of investment made to offshore sectors including real estate, lodging, cinemas, entertainment, and professional sport clubs. In addition, the following types of transactions will attract closer scrutiny from the authorities: 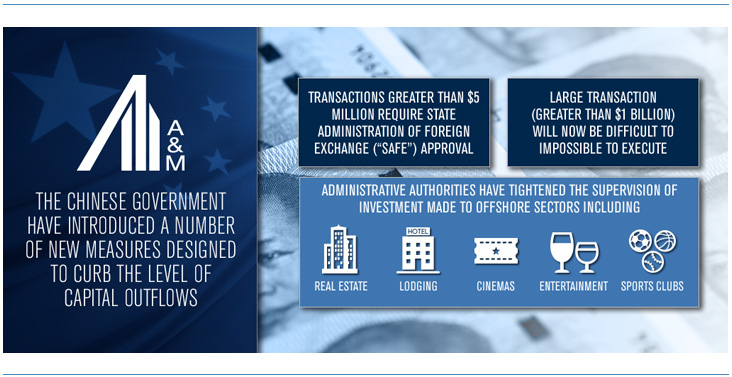 In light of the above, we would recommend Chinese corporates to make prudent investment decisions especially when investing in high risk offshore sectors or adopting risky investment arrangements as mentioned above.

During the announcement of the new rules, the Chinese government has also restated its principle to encourage authentic and compliant outbound investment and will adhere to its “going out” strategy and “one belt one road” initiative. Therefore, our view is that the recent regulations tightening capital outflows will only temporarily impact outbound investments. From a long term standpoint, such restrictions are expected be relaxed once the currency has stabilized and the foreign currency reserve is managed at a healthy level. It is also worth noting that for those Chinese corporates that have already started their outbound investments, they could also utilize their offshore funds for re-investment to mitigate against such new restrictions.

Finally, despite the new foreign exchange measures bringing more restrictions and administrative burden to outbound investments, the trend of outbound investment is expected to increase as the Chinese economies continues its transformation from a low cost manufacturing country to a value add, high tech manufacturing and domestic consumption orientated economy. 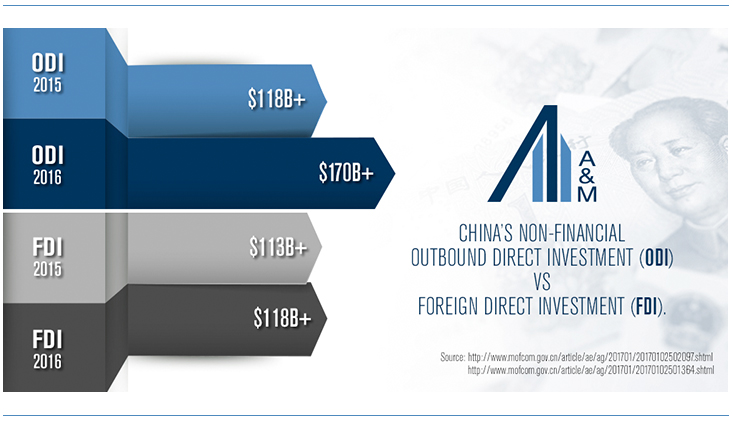 As the current Chinese economy has limited domestic investment channels outside of real estate, more and more Chinese capital is expected to be invested in offshore assets. This is consistent with the current trend – according to the PRC Ministry of Commerce, China’s non-financial outbound direct investment (ODI) is likely to reach USD170.11 billion in 2016, which represents an increase of 44.1% compared to 2015. In contrast, foreign direct investment (FDI) into China will total RMB813.22 billion, which is a 4.1% from 2015.
Source: